Did you take a second glance in Toronto last weekend, when you thought you saw your favourite idols? So did we!  Dance crews all across Ontario were invited to represent the most iconic K-pop acts of the generation, at AllTV’s Music Bank style performance. From SHINee’s famous hand tutting in “Lucifer”, to the sexy allure of Sistar’s “Touch My Body”, all crews WOWED the Korean Harvest Festival with their own unique interpretation of the top Kpop hits.

Hush, hush- it’s DnA! Dasha and Alison complete the power duo group DnA, as they embodied the red-lipped and sophisticated Miss A!  The two long-time friends formed the group to celebrate their love of dancing, and thus DnA was born!

Hailing from Toronto is the all-girl M.Y.Soul dance crew, who put a sexy spin on 2NE1’s hit songs including banger “Come Back Home”. The group has a cool history since being established in 2009 at University of Toronto and continues to experiment with various dance styles.

With more than 20 members in total, Underground Pulse seriously impressed BTS fans with their upbeat energy and hip hop swag, including a mic prop to capture the complete music bank experience.  The large group oozed boyish confidence, style, and “DANGER”!

The 5-member girl group Chérie never fails to charm viewers with appealing outfits and feminine flair! Chérie is perfection! The ladies grew out of talent company Brand New Style, but now are active on their own Youtube channel.  Currently, they have over 1000 followers on Facebook.

Girls, girls, girls absolutely loveee OHDT! Ottawa Hallyu Dance Team is famous for a strong co-ed group of dancers, who know how to please the crowd with amazing floorwork and (occasionally) fanservice! OHDT celebrated a successful year in 2014, after placing #1 at Dano Festival’s Kpop Dance Competition.  They also hosted the Hallyu Gala in Ottawa during August which featured dance workshops by various groups.

Did you know that the three ladies of NATsquared are only in highschool, and are all related?  The dance gene must run deep in that family!  The charismatic trio completely nailed the complicated choreography of a diverse selection of SHINee’s hits, all while sporting SM-inspired outfits. (Did we spot a feathered boa?)

The show came to a close with the theatrical EXOtic mashup by R.P.M’s 4-member girl group from Toronto (including myself!).  Though the group only formed earlier this year, the girls have grown to be close friends and continue to experiment with funky formations and dance styles. Fun fact: The costumes were designed and hand-printed by the members themselves!

To complete the circle of Hallyu love, Pop! Goes The World! also made an appearance by greeting fans at the K-pop DJ Booth (VJ Gerald Belanger and DJ Aimee from Seoul). 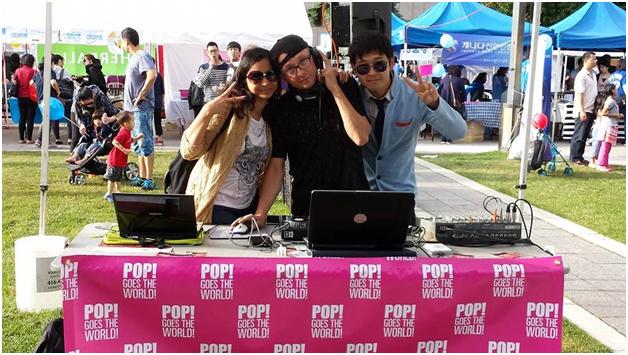 By the look of it, it seems Hallyu is alive and well in Toronto! Oh Canada, we can’t wait to see what you have to offer next!